Pipe Club Teams World Cup 2013 is over and it’s time to make a brief summary of the biggest, this year, pipe event in Poland. Pipe Club Teams World Cup was organized in our country for the second time – previously in 2005 – in Poznań. The organizer was Polish Pipe Club Council (RPKF). The program, in addition to the most important Sunday’s competition, include events scheduled for the whole weekend from Friday 11th to Monday 14th of October . If one would want to try summarizing it in one sentence it would be: Poznań was a meeting point for hundreds of pipe and pipe smoking passionate fans from all over the world. The individual winner was Hans Sonderman (the Netherlands), and the best team was from Italian Corsellini Pipa Club Firenze. Among Poles Damian Mucha (KKF Poznań) was individually the best and the Team 1 from Pipe Club Wrocław .

However, it’s impossible to describe in one sentence everything that has happened during World Cup weekend in Poznań. The first point was the CIPC session, i.e. the deliberations of the Presidents of National Pipe Clubs Councils – members of CIPC. The Presidents first met on Friday evening for the dinner, and then continued official deliberations on Saturday, October 12. The most important result of several hours of the session was the election of a new President of the CIPC Mr. Cornelius Crans from the Netherlands.

In parallel to the CIPC session on Saturday at the Novotel Malta, the exhibition of pipes, tobacco , cigars and accessories and team registration has started in the Novotel Centrum. As befits the World Cup, we had the opportunity to enjoy – and who wanted, to buy – the wonderful pipes manufactured worldwide. So we had there: Luigi Viprati, Baldo Baldi, John Klouček, Markuz Pipes, S. Bang, Stanwell, Don Carlos, Amorelli and many others. There were also Polish pipe-makers present and/or showing pipes: Zbigniew Bednarczyk, Wojtek Pastuch, Andrzej Piontek (Mimotopipes), Tomek Zembrowski, Henryk Worobiec, Ryszard Filar. Also Fajkowo.pl, Akan, Trafika Poznan, Peter Heinrichs, Scandinavian Tobacco Group, Don Lecho presented their own exhibition stands. Everyone could find something and stock up on everything that smoking pipe or cigars needs. Dependent on the wallet content one could spend from a few hundred zlotys to several thousand euros. Exhibition stand of Scandinavian Tobacco Group and MyOwnBlen was especially attractive and successful. Everyone could try there a tobacco blend composed per his own idea. The professional blender – Lasse Berg presented favorite blends preparation process, among others mix with addition of Bison Vodka or whiskey. Those interested could also listen to lectures presented on Saturday. The program of the day ended with a gala banquet.

From Sunday morning, October 13th, the registrations of teams continue and both the hall of the exhibition stands and the tournament room were filling in with slowly growing number of pipe smokers. Just like on Saturday, before start of the competition, the blending of tobacco shows and lectures took place. The start of the World Cup was scheduled for 4pm. About half an hour earlier the club teams began to take place at the designated tables. 293 competitors representing pipe clubs from around the world registered, among others from the United States and Japan. Silesian Pipe Club was represented by 7 members who formed 2 teams. The competition started at standard by stewards distributing: pipes – the competition pipe was a billiard specially made for the occasion by Mr.Bróg, rammers, 3 grams of Captain Black American tobacco and two matches. According to the rules of pipe slow smoking tournament all competitors, on a signal, filled in their pipes with tobacco for 5 minutes then they lit it within the next 1 minute and so the World Cup began. As usual after a while the first competitors finished smoking but to the end of the competition was still a long time to pass. Eventually the best participants smoked well over two hours, and the winner more than three. The individual winner was Hans Sonderman representing the Dutch National Team of the Netherlands (his club finished the World Cup at fourth place), who smoked his pipe for 3 hours 6 minutes and 56 seconds. The second individual place went to Martin Pedain from Dymka Club (Czech Republic) whose time was 2:35:43, and the third was Alessandro Corsellini from Corsellini Pipa Club Firenze (Italy) – 2:29:37. Third place among teams went to Pipe Club of St. Petersburg in Russia. Poles in the rivalry came off very well on 6th and 7th place which went to the team 1 from Pipe Club Wrocław and team 1 from KKF Poznań. In the group of first twenty teams were also Przemyski Klub Fajki, Pipe Club Szczytna i Kalisko Ostrowski Klub Fajki 2010. Individually the best of Poles were: Damian Mucha from KKF Poznan – 8th place , Thomas Chołuj and Mariusz Jakubowski from PC Wroclaw – 15th and 17th place . Detailed results were presented online on the internet and are available on the official website of the World Cup. Congratulations to all! Our Silesian Pipe Club teams eventually took the 61st and 64th place. After the competition and counting of the results there was official awarding of trophies and diplomas for the best teams and players.

The last point of the Pipe Club Teams World Cup was a sightseeing trip on Monday, October 14th. The organizers have planned, among others visit to the Cathedral, the Old Market Square in Poznań and the dinner at the restaurant „Pod koziołkami”

The long-awaited World Cup is behind us. The fact that the organizers were able – on the basis of resolution adopted on April 20, 2013 in Konin at Extraordinary meeting of the Polish Pipe Club Council – to prepare such a large event in half a year only, starting virtually from scratch, shall be highly appreciated. Having in mind that almost half thousands of more or less related to the pipe- people (almost three hundred competitors) shown up in Novotel throughout the weekend, including so many eminent personalities from all over the world, enough to mention the world’s top manufacturers and the world’s leading sportsmen, the sum up of „our” because „Polish” event is just the one word – excellent. This is an impression of our team from Silesia and so Poznań Cup we will remember. There were a lot of us out there, including members not participating in the competition a total of 9 people. Many thanks to RPKF President Henryk Rogalski , Jacek Schmidt and all others who contributed to the preparation of this great event that we could be there, meet up with friends, get to know so many new, peep the best pipe smokers, admire the excellent pipes and enjoy our common passion.

Here are some photographs documenting Pipe World Cup events, more images can be found in our club gallery. We also recommend the Media section of the official website of the World Cup. 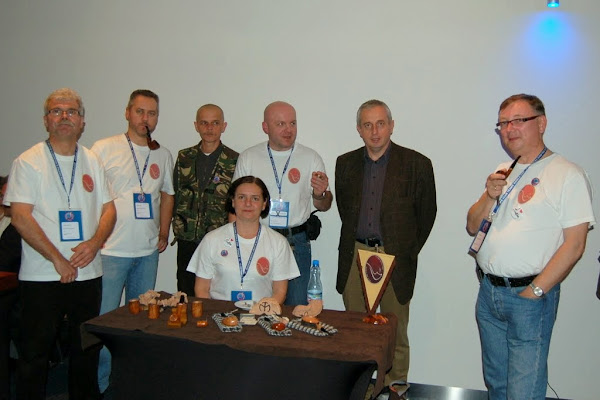 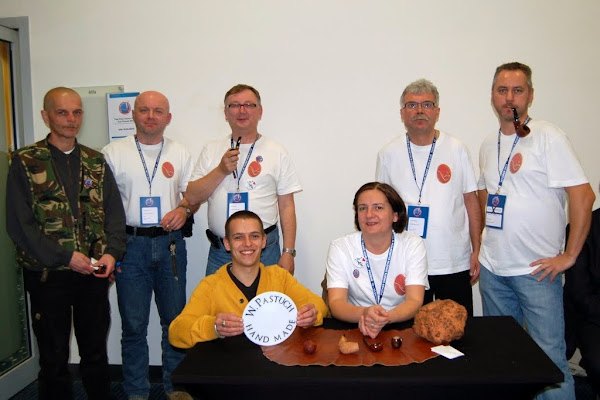 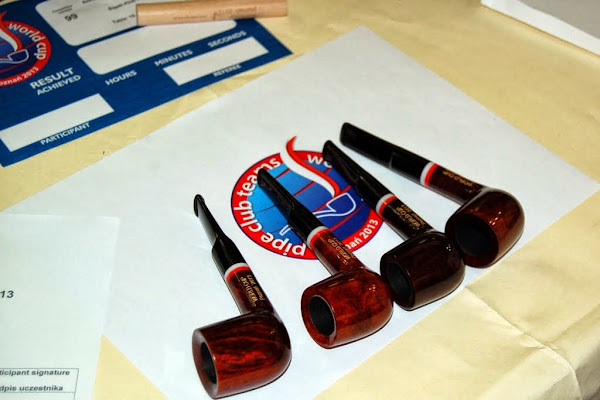 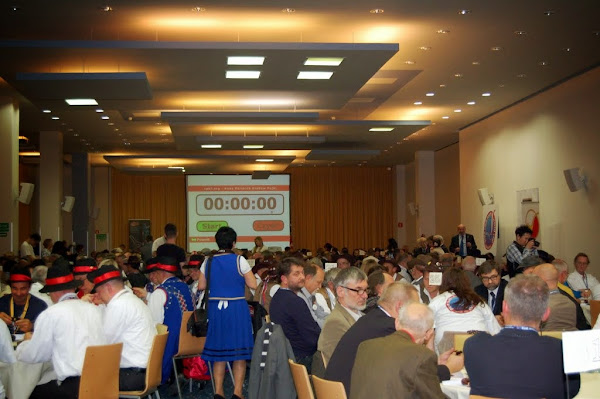 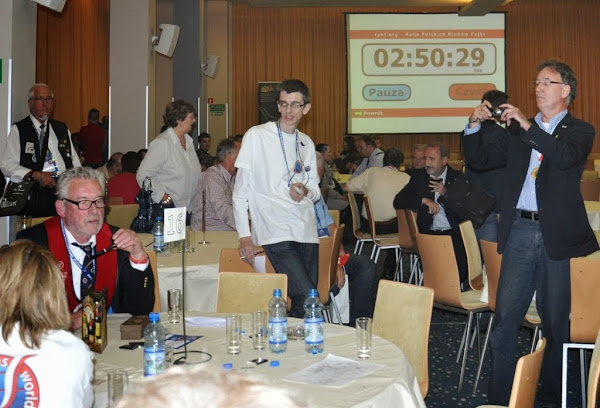 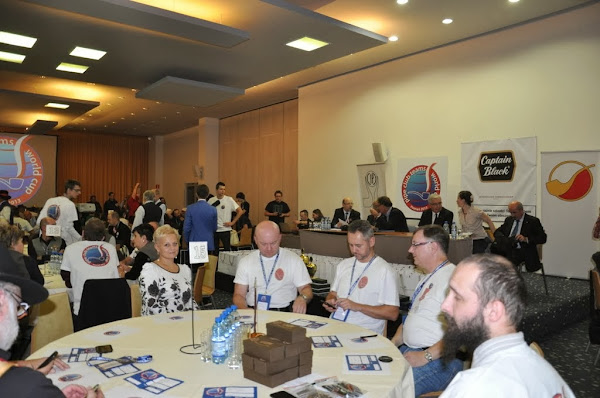 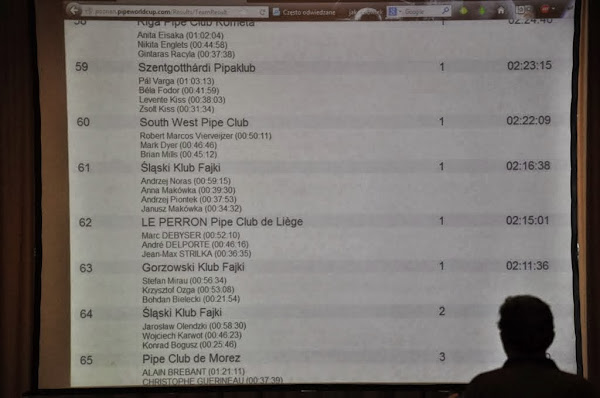